A man in Perth, Australia, was heard shouting from his house, ‘Why don’t you die!’ Upon hearing the distressing cries of a toddler, passers-by alerted the police.

Fortunately, however, the victim of the man’s momentary loss of sanity was not a defenseless child, but a spider – I imagine a Huntsman spider.

What is so fascinating about this story, (about what is such a common occurrence here) – ie. the bullying tactics of a very large, very ugly arachnid that has no place in the human home – is that the majority of Australian men I know have a special fondness for these terrifying creatures.

You see, the secondary career of the Huntsman spider, (after its primary role as the psychopath of the animal kingdom), is to eat mosquitoes.

Obviously, I empathize completely with the man from Perth. I have yet to look at the Huntsman spider with anything other than abject horror since my arrival here, thirteen years ago, although I should point out that I have reached a Frodo Baggins level of heroism when it comes to cockroaches, which I can now watch scuttle out from under the sofa without jumping – back onto the sofa, that is.

For better or worse, these hairy, terrifying brown critters that constitute the stuff of nightmares, are part of Aussie life. In my last job, as a relocation consultant, it was with great difficulty that I was forced to downplay their grossness in conversations with my clients, new to the country. However, I always recommended a pest spray with every parting conversation.

The main problems with these eight-legged monsters is that a) they are HUGE – and hence, difficult to kill, (unless you want cow-sized entrails on your walls or carpet), and b) they have the speed of ninjas.

The old man has been forced to adopt the role of spider-catcher in our home – one of the few reasons we remain together – and I will admit to some old-fashioned swooning each time I see him in full pursuit of the buggers, Bond-style. After he disposes of the carcass – a minimum of ten kilometers from our home, in a place conveniently located near the driving range, I believe – I tend to look at him differently, in the same way that you might see a hot young man with a baby in a sling or a Spoodle on his lap. And he knows it. Sometimes, I wonder if he places those damn spiders in our bedroom on purpose. 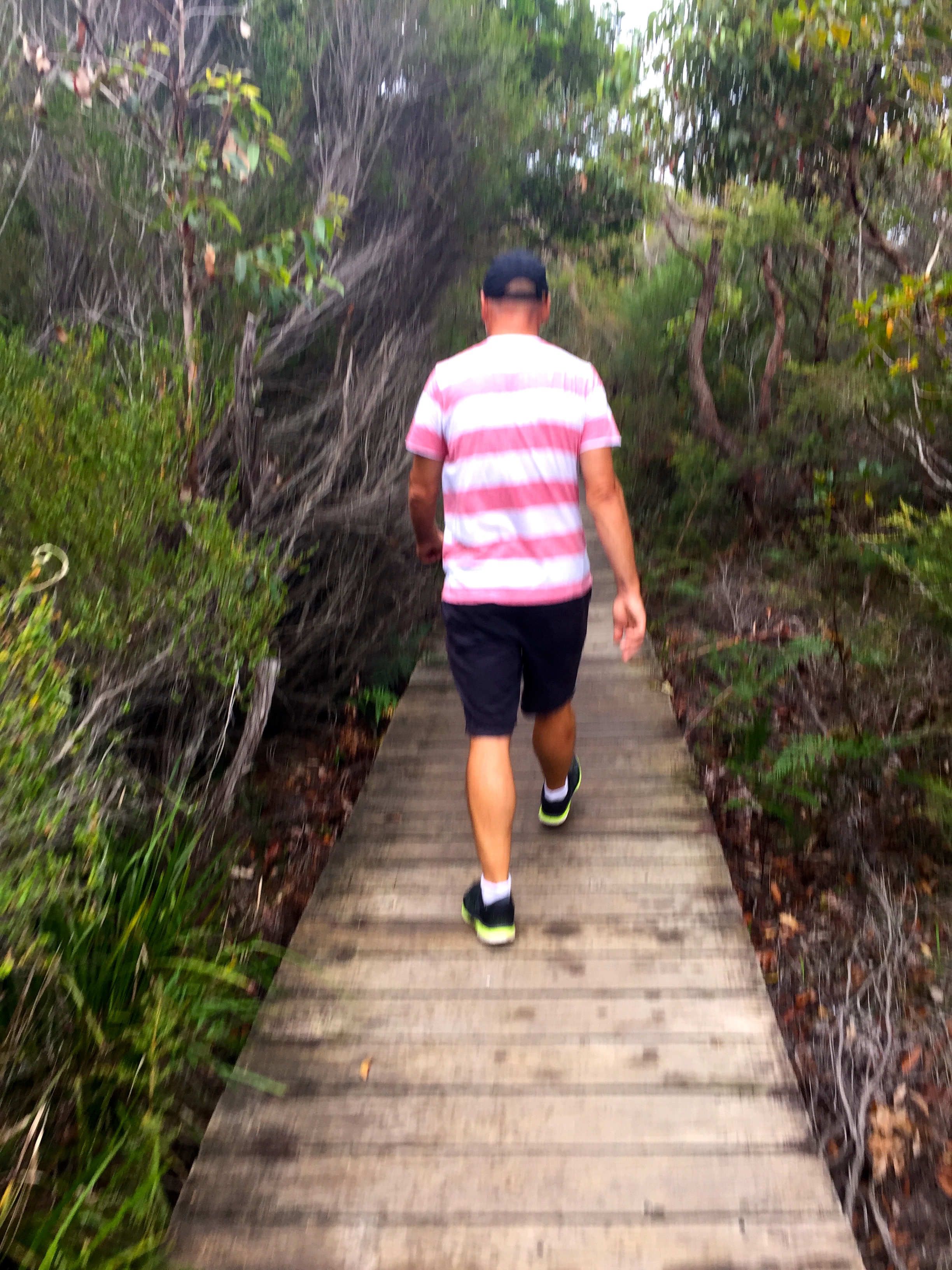 I conquered a few long-held fears during my holiday last week with the old man – the fear of whether we can actually spend time alone together without me wanting to kill him, because I’m aware that I won’t be able to use the PMT card as a defence in our retirement, as well as some rational, innate fears about the Australian wildlife.

Statistically, our adoptive country is proud to record that it has ten of the deadliest creatures in the world, and that’s only touching the surface because those figures don’t account for the deadly plants, animals, and insects lurking in every corner of its landscape that can make you seriously sick.

Basically, everything is out to get you.

It is my belief that the average native Australian is brainwashed as a child with the adage that ‘what doesn’t kill you, makes you stronger’, so when they see dinner-plate-sized hairy spiders such as the Huntsman spider, they are able to look at them in a different light to the rest of us and appreciate them as the spiders that eat mosquitoes, unlike other arachnids such as the Redback, (and even ants), that can put them in hospital.

The less said about the Funnel Web, the better.

What I’m getting to, is that bush walking – note my ability to say the word “bush” in this context without laughing to myself like a five-year-old the first time she hears the word “penis” – is not for the faint-hearted, and completely at odds to the relaxing walks of my past in the pretty forests of the UK where my biggest worries were being stampeded by Bambi and the distance to the next pub.

We did a lot of walking this holiday, in part to witness the truly wonderful landscape that the south coast of Sydney has to offer – having reached that sad stage in our lives where we share lengthy discussions about trees and birds without boring the tits off each other or feeling like pretentious old fools – but mainly to combat the weight gain caused by a liberalness in wine consumption necessary to keep aforementioned inane conversations going, and the horrific calorie count of all the gastronomic delights we partook of (because we were on holiday).  That transitory film of dementia that descends upon the brain on holiday in regard to how easy it is to gain weight at our age really is quite wonderful. 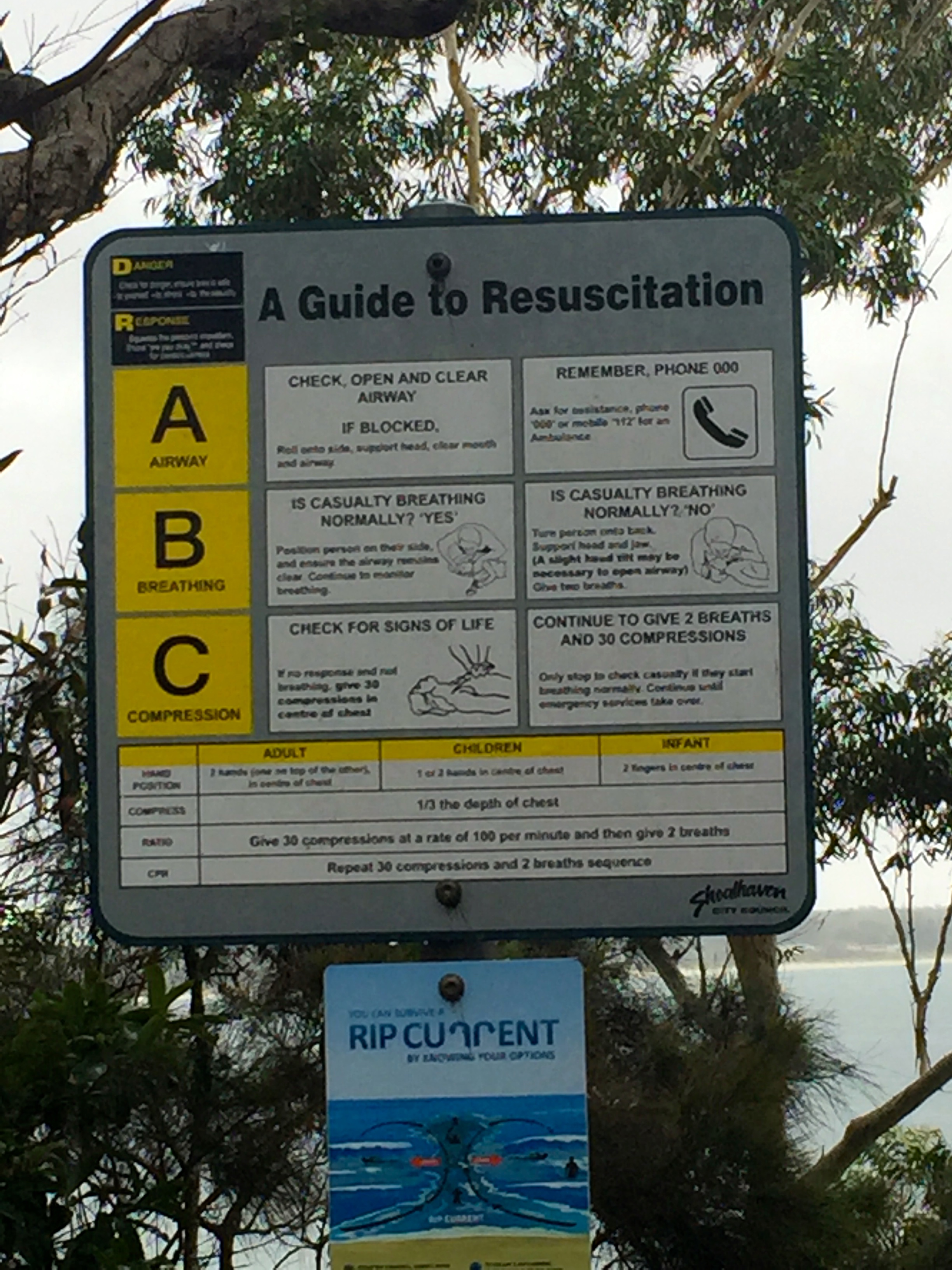 In Australia, even an innocent walk to some of the whitest sand outside of Whitehaven Beach in Queensland (one of the world’s top ten beaches) has its mindfuck challenges. Where else in the world do you find “How to resuscitate” boards at each entry point to the beach? Because if the rips and sharks don’t get you, there are killer octopi, snakes and poisonous plant life, all waiting. Apparently, Jervis Bay, the last stop on our journey, is renowned for the Diamond Python, a wildlife fact the old man chose to keep to himself while I used the council “bush” toilets. Option two, of peeing behind a bush, wasn’t much better. 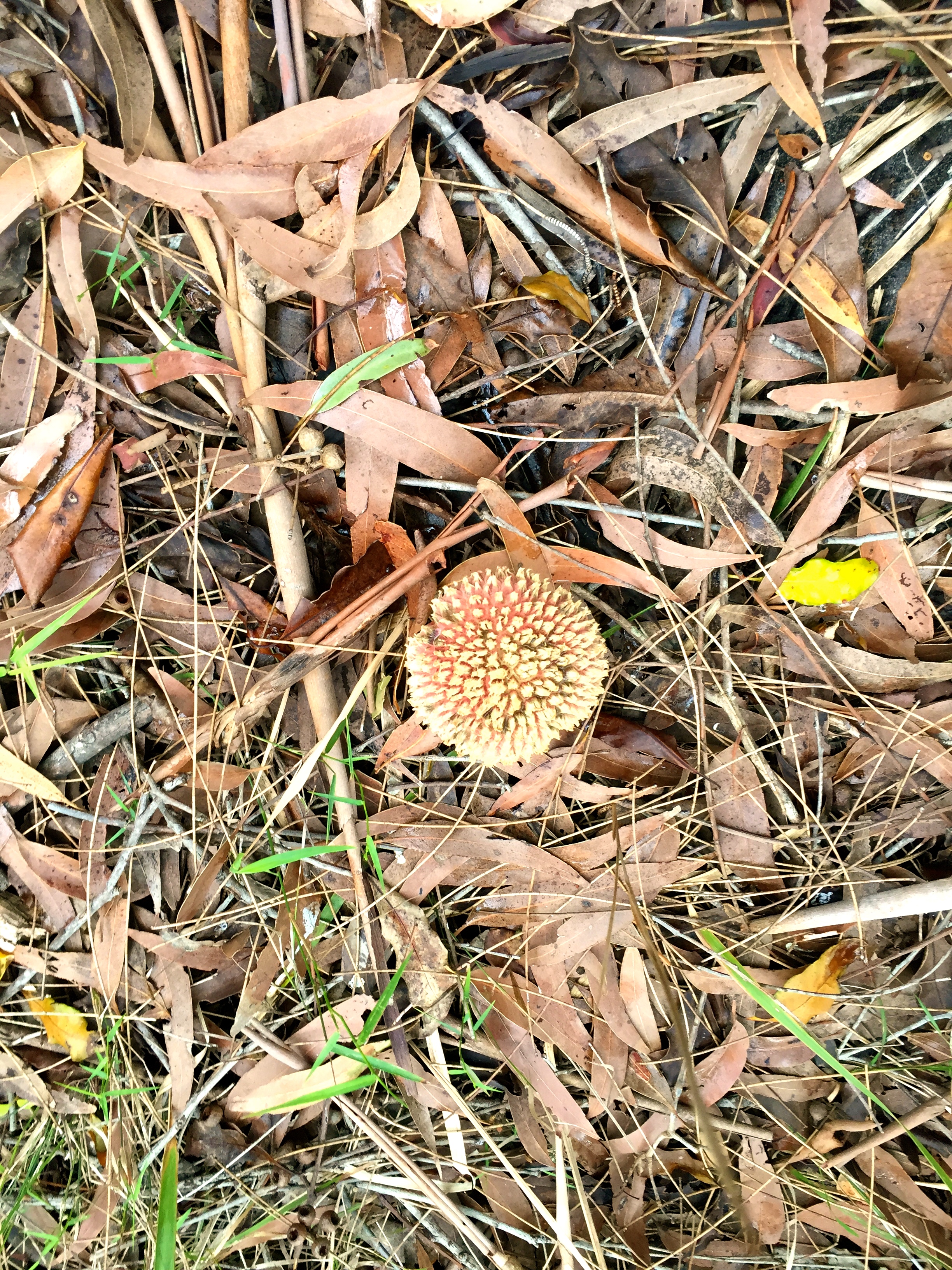 The photo to the left represents your typical Australian bush mushroom –  hardly the type you rustle up a veg Risotto with  – and the one below is the type of daunting shape that stops you in your tracks for a second look, provoking the relaxation of your Sphincter muscle and your heart rate to increase to a dangerous level. Generally, you only remember that you’re in the middle of fucking nowhere around the same time that you discover that you only have one bar left on your phone. 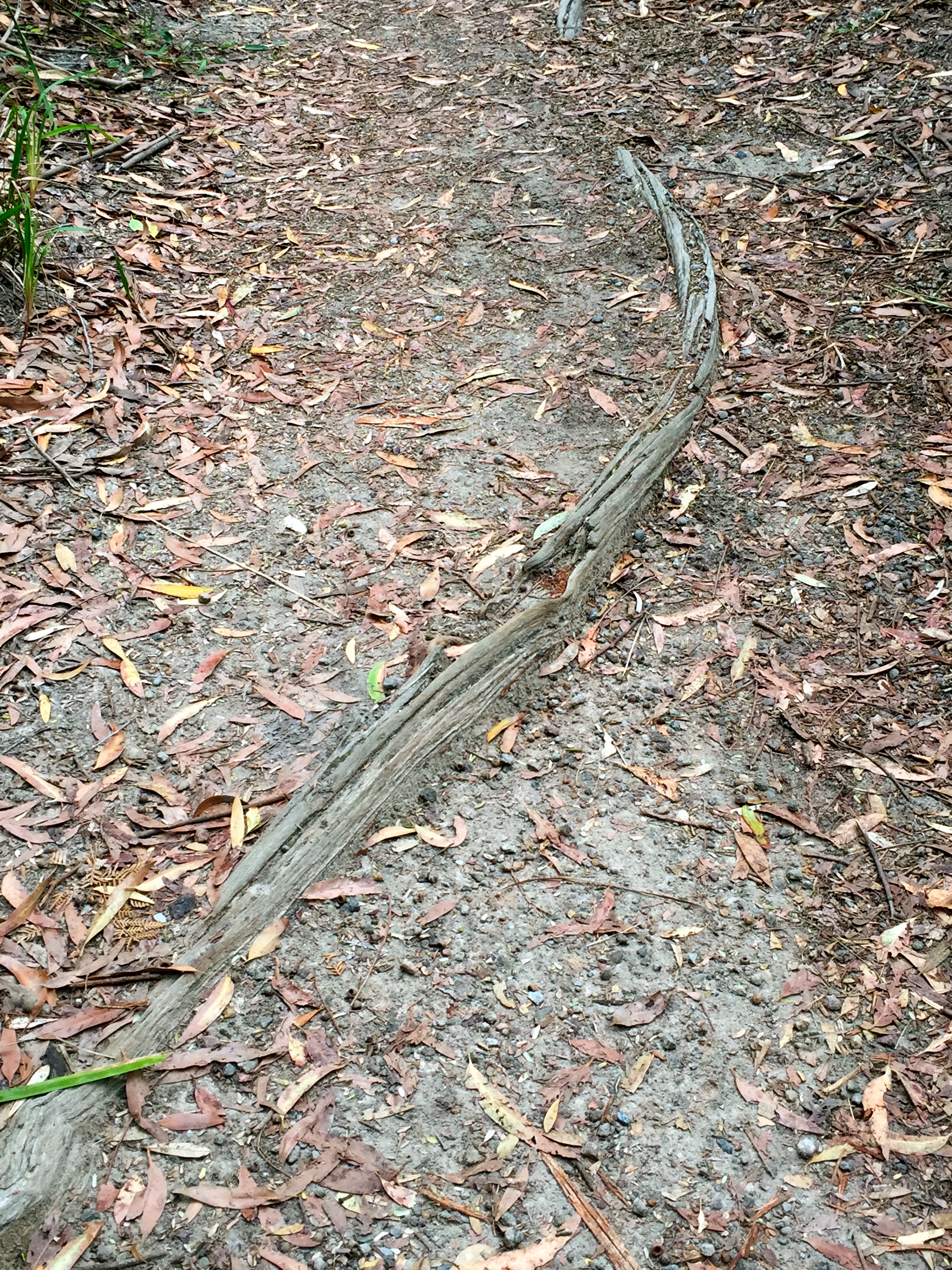 In the bush it can feel like there are eyes on you from every direction, which is why I let the old man lead on our jaunts, indeed, the only time I allow him to assume full patriarchal, cave-man superiority before we get home and I am forced to remind him that men are to be seen but never heard.