When I part my hair in a section that falls outside of the eight-weekly dye zone, I’ve noticed some ominous course grey hairs sprouting through. Do you ever wonder how they grow so goddamn quickly before you get the chance to ambush them?

I haven’t been too concerned about this tell-tale sign of ageing before, because peroxide has been my best friend since my early twenties. I have noticed that my hair has begun to thin out over the past few years, mainly because of how often the old man complains about the hair accumulation on our bathroom floor and in our food, but I’m not even close to the step of letting myself go grey, even though I have great admiration for the confidence of those who do.

Like most women, I’ve played around with my hairstyles and colour over the years – one year short, the next long – but I always end up going back to the same tried and tested formula where I feel most comfortable – a choppy, mid-length, honey-blonde cut – nothing too dramatic. If anything I could be accused of being boringly safe.

Whenever I see middle-aged women with blue hair or scarlet hair, or balayage, I’m in total fucking awe of their strength and freedom of expression to be so ‘out there’, and of how ready they are to demonstrate to the world their new confidence in their own skin. My natural instinct is to merge into the scenery rather than be the focus.

Perhaps I’ve learned my lesson about hairstyles over time. In my mid-twenties, during a testing point in our relationship when the old man refused to move in with me even after my ultimatum, I booked myself the first appointment I could get, had all my hair chopped off and reinvented myself as Lady Diana in a typically impulsive ‘fuck you’ gesture.

Then there was my first and only perm in my late teens, which ‘took’ a little too well and ended up in the sort of mesh of tight curls a bird could happily nest in and definitely not the natural waves I’d hoped for. It meant I had to wear my hair in a French plait for the following six months.

There have been several colour disasters experiments – something that every girl needs to do as part of her journey to a woman – although NC will tell you that I begged her not to do it each time she got the home dye out. My most recent experiment was a few years ago when I decided to revert back to my own particular shade of ‘mouse’ to save on hairdressing costs and ended up looking like some prison escapee who had dyed her hair to avoid capture.

I’m not fixated on my hair like some women, because thinking about how to conceal my muffin top and eight chins is a pretty full time job. On the whole, it’s not ‘great’ hair like Jennifer Aniston’s – whose style I asked for numerous times but which sadly never quite materialised out of my hair ‘type’ – but it’s never been too demanding; never really let me down.

Which is fortunate because another of my pet peeves is visiting the hairdressers and being forced to fork out hundreds of dollars as well as make inane conversation with someone half my age with whom I have zero in common with, when I’d much rather make the most of two hours of peace and devour their trashy magazines.

In fact, it’s quite shameful how rude I am to hairdressers. I figure that if I tut enough, slurp my coffee loudly enough and make it patently clear that I don’t want to communicate with them they’ll eventually get the message and leave me alone to ‘Who Wore It Best?’

I may have to change my attitude with the advent of these ‘Bad Grey Days’.

I went to the hairdressers to get Jen Aniston’s new haircut today.

Unlike the majority of women, going to the hairdresser’s is not a favourite pastime of mine. Firstly, it involves me leaving the house and secondly, having to make small talk with someone I don’t know, nor particularly want to know, is not what I call ‘relaxing’.

Then there is the anxiety of leaving the salon looking far worse than when I went in. And I do find it increasingly hard to sit still for two hours.

And the head massage is just plain awkward.

Making the decision to dye my hair for the first time all those years ago is probably up there with cigarette-smoking and eating Green and Black chocolate in terms of bad decisions. It was far easier to give up the cigarettes.

I did try and revert back to my natural shade of common ‘mouse’ a couple of years ago, but the old man, (who wouldn’t notice if I lost both legs), said he didn’t like it, so I’ve been back to bottle-blonde ever since.

But how fucking tedious is it watching someone put foils in your hair? There must be a special clause in health insurance policies to cover hairdressers for mental scarring caused by the sheer monotony of their occupation. 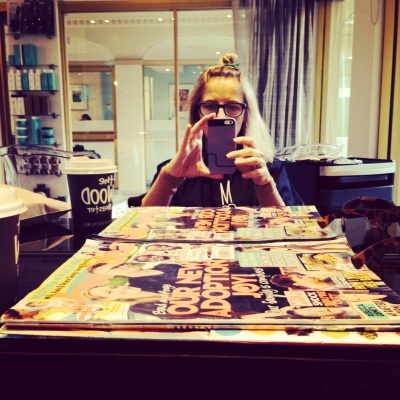 I rarely get my hair cut these days because I spend all of my hair budget (as well as the old man’s, because fortunately he doesn’t need it) on the dyeing process, so my everyday hairstyle tends to be the messy bun. But because this week I’m PMS-ing, which makes me a little bit impulsive and a lot more demanding (amongst other things), I decided to do something really radical and spice up my hair. And before I knew it, I found myself on Pinterest doing my due diligence when I found out that Jen has recently changed her hairstyle.

Now, I’ve been working ‘the Rachel’ hairstyle very successfully for quite a few years now, but if Jen can cope with change, so can I. (I thought). So I decided to go for Jen’s new bob – which is kind of long at the front and short at the back and a bit choppy.

WHATEVS – I KNEW WHAT I MEANT!

Got to the hairdressers, VERY excited at the prospect of re-inventing myself and I explained exactly what I wanted to my hairdresser (see above).

They go too short or they don’t cut off enough and you come out $200 lighter with nothing to show for it – and that is exactly what happened to me today. ALMOST. Because not one to sit quietly back and accept crippling disappointment, I waited until after she’d finished the blow dry and then asked her to take another inch off – all the way around. Cue awkward silence as all small talk ceased and you could have heard a Kirby grip hit the floor. I stuck my nose in the trashy mags and settled in for lunch and afternoon tea, while my hairdresser started snipping all over again.

The end result – my new cut looks a lot like the style worn by Javier Bardem in No Country For Old Men. It wouldn’t look out of place on a librarian (Not you, M) or in a pre-school photo in the days when the mums thought that using bowls would be good for cutting their kids hair.

The old man said I looked ‘distinguished’ (FML) and then tried ‘vaguely attractive’ and finally stammered ‘HOW MUCH?’ and had to lie down.

I still look nothing like Jennifer Aniston, but perhaps it’s got nothing to do with the haircut.