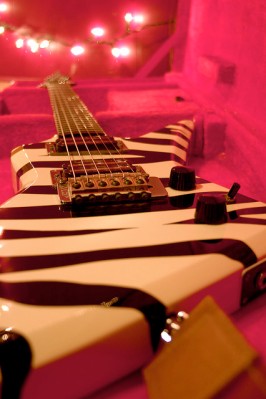 Remember those exploratory mind games you used to play with your kids when they were about five years old, when, with some careful prodding, they confided in you what they wanted to be when they (finally) ‘grew up’? You were of course holding out for ‘doctor’, or ‘accountant’ at a push, so when they said ‘dustman’, you feigned encouragement like the supportive parent that you pretend to be, while secretly thinking ‘over my dead body’.

Our son always wanted to be a rock star.

And he was very persistent. By the age of six, he had already coerced the old man (he of the tight pocket) and I, who have the combined musical talents of a deaf mute between us, to acquire some ropey old guitar from EBay, and the Nike soccer boots and Chelsea kit were shoved to the back of a cupboard.

Nine years and seven guitars later, our son has resurrected our musical education, and taken us on a journey that has introduced us to the profane language of Greenday, the titillating body thrusts of Michael Jackson and the dextrously challenging chords of Mayer.

And in all that time our son’s dream has never waned (like we secretly assumed it would), but gathered in momentum, bringing us to the hiatus we face now, where in his mid-teens, we believe he seriously needs to start weighing up his life options. With pressures regarding HSC choices and the ‘real world’ beckoning, we’re thinking it may be time to gently burst the ‘rock star’ bubble, while he still has time for a back up plan?

If I’m honest, the ‘gentle’ approach is not one of my stronger traits, and neither is his ability to listen. We are both still pretty traumatized from the awkward moment when I thought I was confirming his suspicions about Father Christmas, rather than informing, ‘intuitive parent’ never being my strong suit. In my defense, I saw it as an act of mercy at the time, a way of protecting him from the ridicule of friends already ‘in the know’; he has defined my interference as destroying the very fabric of his childhood.

It’s not that he isn’t talented, and there’s obviously a no better all-inclusive lifestyle for debauchery/making a living, if you ‘make it’ in the music industry. But we all know that it takes more than an overflowing cup to fulfill your dreams and someone needs to be the realist here. It’s obviously not going to be his father, who is waiting in the wings, spliff roller packed, in readiness for life on the road. 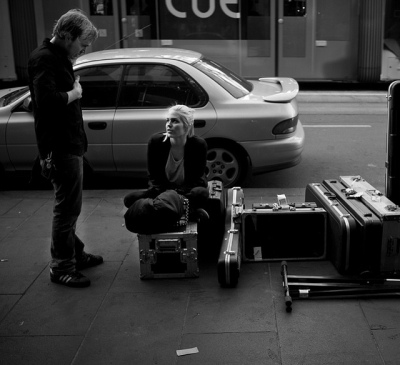 And if I’m honest, this rock‘n’roll ‘thang’ just isn’t that glamorous.

Your average band parent leads a pretty sleazy, nocturnal existence. Lugging all kinds of music paraphernalia from one seedy joint to the next, and being forced to endure calibres of music usually reserved to elevators, XBox soundtracks or the early rounds of Eurovision, is not my idea of fun.

And as for the venues for ‘undiscovered’ talent, they fall into two distinct categories: murky, caverns of general seediness or mud-sodden outdoor events without proper toilet facilities and a maximum audience of three (parents that is). If there’s a youth rock band playing, you can guarantee that the motley throng of over-age groupies lurking outside will be the mums, secretly desperate for a bit of Buble, hot chocolate and a warm bed.

My progeny also happens to be the lead singer, personality type ESFP, world class prima donna in the making. It’s impossible to gyrate your stuff in front of a mass of strangers and still be categorized as ‘normal’, and he is no exception. There are times when I truly question whether those moments of stage glory fully compensate for the mood swings exacerbated by pre-stage nerves and the post-performance hyperactivity from ‘the rush’.

Probably, although only just. The level of abuse aimed at me in my recent ‘Roadie-Parent’ review was scathing. The accusation of shooting shoddy video hurt, especially as I’m still nursing a ‘video-elbow’ style injury provoked by having to hold the camera two feet above my head for nearly an hour, in a mosh pit of two hundred sweaty, strutting fifteen year olds.  Apparently the resulting video looked like I had a bad case of the DTs, with the bonus sound effect of me cackling like a hyena in the background, and was therefore considered unprofessional by the rest of the band.

But my ‘rock’ experiences have provided me with a plethora of new vocabulary. I can now distinguish between output and input, know a wah-wah from a whammy pedal, and I have acquired a personal understanding of ‘bulging disc’, ‘tinnitus’ and ‘cephalgia’ (headache).

So the question is, do we try to persuade him to ‘get a proper job’ or do we let him follow his dream? We’ve been told he has that ‘tone’ so sought after by the judges on ‘Idol’ and he can certainly pen a catchy tune, but whether he will ever have the earning capacity to fund a mortgage remains to be seen.

He has Glastonbury in his sights, not Sydney uni like most of his peers. The fear is, of course, that he could end up another music casualty, exhausted by rejection, with no other feasible direction in later life, and we’ll still be doling out twenty dollar notes just to get him out of the house.

The old man’s take on it the other night (as he was looking up ‘piercing’ on the Internet) was – “one person working towards a dream is worth 99 people just working” (Lani Kraus, Writer) – which he apparently picked up (in between naps) at some motivational conference. It was his way of telling me to leave well alone.

5 thoughts on “Midlife Mayhem – I Want To Be A Rockstar”

'Writing is the only thing that, when I do it, I don't feel I should be doing something else.' Gloria Steinem

STUFF I WRITE ABOUT

Follow @LouisaSimmonds
The dog is transitioning into a cat, although she. doesn’t have quite the same agility to move from the position quickly. #dog #cute #transition #cute #pet #love

DATES OF MY POSTS

Stuff I Write About